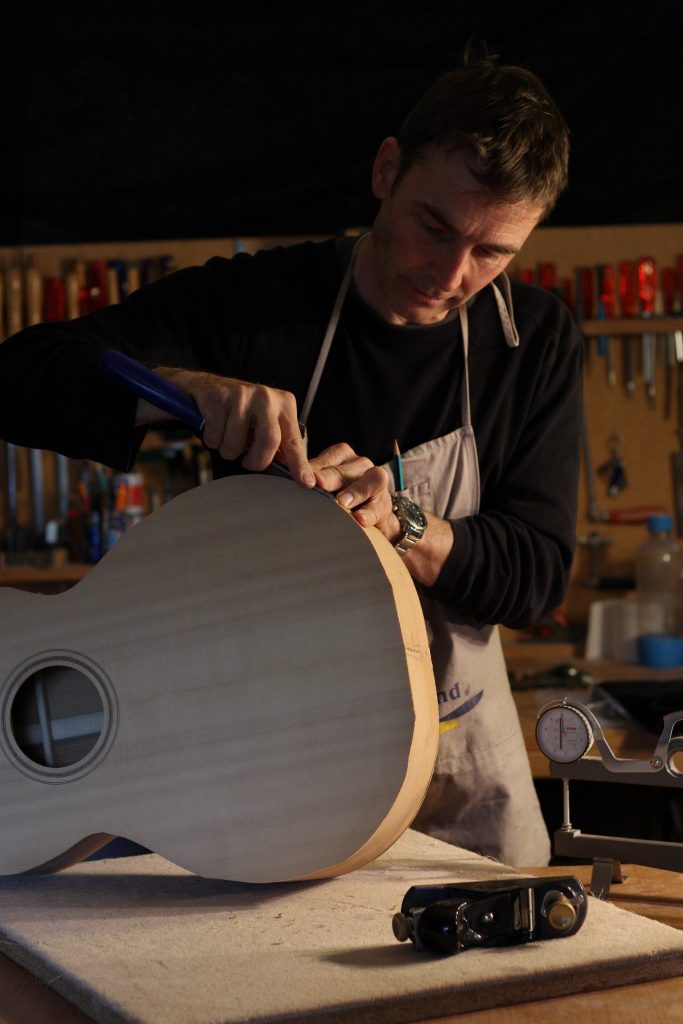 I’ve been building guitars for about 35 years now. In my own shop, doing business for customers, for more than 20 years.

I do a lot of repairs and maintenance jobs, but I also build my own guitars. Each instrument is made from scratch. Bindings, rosettes and all the other parts which other manufactures often purchase somewhere, I make myself. This is very time consuming but gives me control over every little detail of the guitar and makes it unique. Often I even resaw my own wood from timber.

My goal is to build great sounding, easily playable, long lasting instruments that have as little impact on the environment as possible.

To achieve that I use local woods whenever possible. If not, I make sure they come from renewable ressources.

When I first started building, as a teenager, it was a challenge. I wanted to build my own electric guitar. Because I wasn’t entirely satisfied with the result I built the next one and so it became a hobby which at some point turned into a profession.

In needed some advice when I was building my first instrument. In the city where I grew up, there was a luthier. It was the late Rolf Spuler, who at that time developed his famous instruments. I spent endless hours in his shop, observing how he worked and studying his approach to buildings guitars.

A few years later I wanted to build an acoustic guitar. Again I felt I needed some help which I found in François Corbellari, who let me build a classical guitar in his shop. He as well passed away much too soon.

It was then that I decided to try to build guitars as a profession. To get the training needed, I spent the next two years building several acoustic and electric guitars in a small shop. Because I owned few tools and no stationary power tools back then, most of what I did, I made by hand. which taught me a lot about handling hand tools and how to maintain them.

I felt I needed more insight into guitars building and so I worked from August 1998 to December 1999 for Larrivee Guitars in Vancouver, Canada. A couple of months before I started they had expanded and moved into much bigger facilities so they needed more staff. I worked in a lot of different departments, but mainly in buffing and finish sanding.

With the turn of the millenium I felt it was time to start my own business. In Winterthur Seen I opened my first shop. It was in a building where a lot of small businesses were located. During coffee breaks I learned a lot from the cabinet makers and carpenters who also let me use their machines and tools. Soon, I had the first repair jobs which still are my main business.

At first I didn’t like them too much but after a while I realized that they are sometimes more challenging as building new guitars. It also gave me an insight on how guitars work and what technical flaws they sometimes have. This affects how I build my own instruments a lot.

In 2006 my wife and me bought a house and in the following year I moved into the basement of the annex we had built. I feel grateful to have 35 square meters, central heating and daylight to work in, which I sometimes had to do without in other places I had my workshop set up. It’s a wonderful place which is ideal to build and work on fine instruments.